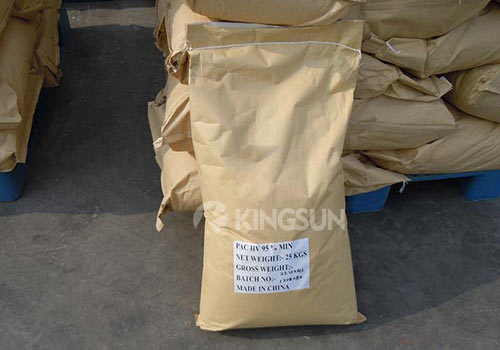 PAC polyanionic cellulose is a high-purity refined product with a white flowing powder appearance, and its aqueous solution is a transparent viscous liquid. Polyanionic cellulose is a water-soluble polymer, which can be used as a thickener, rheology control agent, binder, stabilizer, protective colloid, suspending agent, and water retention agent.

In the oil drilling industry, poly anionic cellulose is a better drilling mud treatment agent and material for preparing drilling fluids. It has a high pulping rate and good salt resistance. For light cement slurry, sea cement slurry and saturated salt cement slurry, oil drilling grade poly anionic cellulose is an excellent fluid loss treatment agent and has a good viscosity lifting ability and high-temperature resistance (150 ℃) ability. Besides, it can also be added with calcium chloride to formulate into drilling fluids of various densities so that the drilling fluids still have a certain viscosity and a low fluid loss.

Kingsun PAC-HV and PAC-LV can reach the European OCMA standard and the American Petroleum Institute API 13A standard.

■ Suitable for any mud from freshwater to saturated brine.

■ PAC-LV can effectively reduce fluid loss. PAC-HV has a high pulping capacity, and has an obvious effect of reducing fluid loss.

■ Mud fluid can inhibit the dispersion and expansion of clay and shale in high-salt media so that the pollution of the good wall is controlled, and the time of clay hydration, expansion and dispersion is delayed.

■ PAC polyanionic cellulose can be used in many complex formations and difficult drilling conditions such as ocean and desert.

It is ideal to use PAC powder as an inhibitor and fluid loss agent in drilling fluids. The mud fluid formulated by Kingsun PAC polymer can inhibit the dispersion and expansion of clay and shale in a high-saline medium, thereby controlling well wall pollution.

■ It has the carrying capacity to clean the wellbore, and the workload of maintaining the wellbore is reduced;

■ It has the ability to resist the infiltration of water and sediment;

■ It can be stored or transferred from well to well, which is lower in cost than ordinary mud workover fluid.

The fracturing fluid prepared with PAC in fracturing fluid can withstand 2% KCI solution (must be added when preparing fracturing fluid) and has good dissolution performance, easy to use, can be prepared on-site, and has a fast gel-forming speed and strong sand carrying capacity. Used in low osmotic pressure formations, the fracturing effect is more outstanding.

With over 15 years of history, Kingsun has become one of the most professional polyanionic cellulose manufacturers and suppliers in China. Kingsun has multiple automated production lines. Up to now, the output of Kingsun cellulose ether can reach 5,000 tons/years. Besides, Kingsun products have passed ISO9001 quality management system certification and many other certifications.

Many customers have established long-term cooperation with Kingsun because of our good quality products and timely delivery. If you are looking for PAC polyanionic cellulose and other cellulose ethers for your business, please feel free to contact us to get a free quote at any time. We will reply to you as soon as possible.